« Back to Latest News and Blog « Older Entry | Newer Entry »

According the latest diagnostic and statistical manual the DSM 5 Fetishistic disorder is a mental health condition that centres on the employment of inanimate objects as a source of sexual satisfaction or the fulfilment of sexual fantasies or urges.

Luckily for many people out there this measure of Mental illness does differentiate between fetish and disorder. Basically if you are not hurting yourself(needing medical treatment) or anyone else and it is within the law, I say go for your life. However, if your sexual behaviour and needs begin to cause you or your partner a level of distress that affects eithers ability to function, then perhaps you should take a step back look closely at the motivations behind the behaviour or need.

So lets look at some of the most unusual fetishes. There is certainly something for everyone out there. I do not highlight this to embarrass or humiliate, but to normalise the fact that most of us have some kind of ‘out there’ fantasy we use for arousal. The degree of ‘unusualness’ is really only measured by our own frame of reference. It is said that fetish is usually enjoyed by males with a ratio of about 20 to 1 woman.

1.LoonersFetish – in this category you can be a popper, non popper or semi popper. Balloons are the source of the sexual attraction and arousal. The person finds great love in the colour, size and feel of the balloon.

3.DendrophiliaFetish – Trees with appropriately shaped holes or crevices create the perfect sexual partner for those inclined.

4.CuckoldFetish – This fetish is fairly common whether in reality in a relationship or safely tucked away in fantasyland. This is where a man becomes sexually aroused in the knowledge that his partner or wife is having sex with another person. Sometimes this is set up by the husband himself and is not always within view. One would hope this is consensual for the other partner.

5.Teratophilia Fetish – Here sexual arousal is gained when having a sexual encounter with someone who has physically deformities. There are categories of this around being attracted to amputees and those with excessive scarring.

6.Window Fetish– Arousal is obtained from rubbing oneself up against a warm window where the firmness and heat can stimulate.

7.SploshFetish – the desire to cover oneself in candy or other foods and have people eat off you.

8.Zentai Fetish– This where people where a costume called a Zentai which is like a second skin. They are completely anonymous and 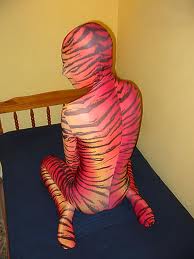 naked underneath. They enjoy the feel of the suit as well as the ability to go out in public.

9.Techno Fetish – There is a large following of this particular fetish. The ideal female robot and sex partner is a much sought after product. Companies have yet to master the natural expressions and movements of a female which hinders sales.

10.Emetophilia Fetish – The sexual arousal gained by being vomited on or vomiting on someone.

Oops, you forgot something.

The words you entered did not match the given text. Please try again.